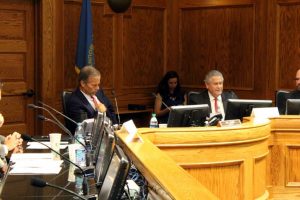 The Senate Commerce, Science, and Technology (SCOM) Committee held a field hearing on implementation of the Surface Transportation Board (STB) Reauthorization Act of 2015 (Act) on August 11 in Sioux Falls, SD.

Convened by Committee Chairman, Senator John Thune (R-SD), the hearing provided an opportunity for shippers, including Freight Rail Customer Alliance (FRCA) Board member Thomas Heller and CEO of Missouri River Energy Services (MRES), to share their views on the law’s implementation.  The three STB Members also testified, describing the actions the STB has taken to date to implement the Act in the eight months since the law was passed by Congress and signed into law by President Obama (P.L. 114-110).

In his opening statement, Chairman Thune described South Dakota’s dependence on rail to get products to market, create jobs, and grow incomes.  “That’s why it’s so important that, when problems arise in our nation’s rail system, we have efficient and effective oversight,” he said.

“Despite concerns from businesses about the burdensome processes at the STB, Congress had not reformed or reauthorized the agency since its creation in 1995.”  Click here for Chairman Thune’s remarks and submitted written testimony from all witnesses.

Chairman Thune said he called the hearing “to examine completed and ongoing implementation work at the STB and hear about ways to maximize the law’s benefits for the businesses that depend on rail,” Chairman Thune said.  He expressed interest in STB’s work in three areas of the new law:

Chairman Thune expressed satisfaction with the Board’s actions to implement the new law.  “The Board is on track to meet all deadlines, a feat not often accomplished by other agencies,” he said.

The first panel of witnesses was comprised of officials representing diverse shipping interests:

Shipper witnesses expressed their strong appreciation to Chairman Thune and the Commerce Committee for taking the lead on reauthorizing the STB and praised the efforts being made by the STB to implement the new law.

Skuodas testified that ethanol refiners such as POET are particularly susceptible to rate increases. “Nearly 70 percent of all ethanol produced in this country is shipped by rail,” he said.

Skuodas encouraged the STB to continue requiring railroads to provide rail service data and to exercise its new authority to proactively investigate rail service issues.  “We in South Dakota experienced terrible rail service problems several years ago that impacted almost every rail shipper in the northern states,” Skoudas said.  “By continuing this critical reporting and by giving the STB more authority to investigate, we believe the STB and others can identify potential service problems before they snowball and impact larger sections of our nation’s economy as they did in late 2013 and throughout 2014.”

In his testimony, Mack expressed support for the STB’s improved arbitration process and the Board’s ongoing efforts to improve its existing rate case methodologies.  “However, it is becoming increasingly clear that the Board’s primary rate case methodology, the Stand Alone Cost (SAC) test is too complex, costly, and burdensome,” Mack said.

Heller described the decade-long rate case battle that MRES and other utilities fought over rates charged by the Burlington Northern Santa Fe Railroad paid to haul coal from the Powder River Basin to the Laramie River Station (LRS) to serve customers to illustrate the need for rate case reform.  “In 2004, the LRS contract with BNSF to deliver coal expired,” Heller said. “We were unable to renegotiate an acceptable agreement with BNSF and they filed a rate tariff at the STB.  LRS participants then filed for rate relief with the STB. After 10 years and at a cost to LRS owners of over $10 million for legal and consulting fees, we still had no settled rate.”

“In May of 2015 we successfully negotiated a settlement agreement with BNSF ending our dispute at STB, Heller said.  “Without our settlement, we believe we still may be fighting this case at the STB.”

On behalf of FRCA, Heller praised Chairman Thune and the Commerce Committee for provisions in the Act establishing new requirements or encouraging the completion of longstanding pending procedures before the STB.

Discussing agriculture issues, “Agriculture is South Dakota’s largest industry,” Knecht said in his testimony.  “Simply put, rail is our gateway to the marketplace.”

“Over the past decade, the Government Accountability Office and the Department of Justice Antitrust Division have published reports raising concerns about the efficiency of rate review process for shippers, particularly captive shippers served by a single railroad,” Knecht said.  “So the ability of the STB to investigate rail issues is enormous in South Dakota, as we are the definition of captive shippers.  Our corn is railed on the BNSF, the only Class One railroad in South Dakota.  So, the ability of STB to independently investigate is very important as is the ability to share information publicly,” he said.

Thune posed several questions to shipper witnesses on topics ranging from the Stand Alone Cost (SAC) test and alternative rate methodologies allowing the ability of farmers to access the STB with rate complaints and the Act’s impact on the biofuels industry.

The second panel consisted of the three current STB Members, each of whom provided their perspective on the Board’s implementation of the new law.

STB Chairman Daniel R. Elliott’s testimony laid out the actions taken by the Board in implementing the Act.  “As result of the Reauthorization Act, the Board has achieved greater transparency and efficiency, which directly benefits the stakeholders that we serve.”

Elliott credited the Act’s requirement for quarterly updates on STB activities with helping to clear the backlog of pending rulemakings on the Board’s docket.  “We are making steady progress in all of the major actions that the Board is undertaking to execute these enhanced responsibilities.”

Vice Chairman Deb Miller and Member Ann D. Begeman agreed with Elliott that the collaborative discussions with stakeholders authorized under Section 5 of the Act have given the agency greater flexibility and opportunity to discuss complex proceedings and issues that are before the Board.  Moving forward, Miller proposed repealing the Board’s rule prohibiting these types of meetings, rather than waiving each meeting on a case-by-case basis.

In addition, Miller said that expanding the Board to five members as required under the Act would allow two members of the Board to communicate with each other about pending matters without running afoul of the Sunshine Act (which requires that communications involving a majority of the Board to be publicly disclosed).

Begeman highlighted the Board’s Rail Customer and Public Assistance Program (RCPA) in which any one can seek informal assistance from Bboard staff regarding a wide range of matters. The RCPA program also helps out with informal dispute resolution through mediation. “This is an agency success story,” Begeman said.

View other articles in the October 2016 Newsletter