The April 5-6 Fly-In was the first major industry event hosted by FRCA since its creation in September 2015. Industry stakeholders joined FRCA members in meaningful and candid discussions with Surface Transportation Board (STB) Chairman Daniel R. Elliott, STB Member Ann Begeman, and staff of the Senate Commerce, Science and Transportation (Commerce) Committee and House Transportation and Infrastructure (T&I) Committee including:

The discussions focused on the ongoing implementation of P.L 114-110, the STB Reauthorization Act of 2015 by the STB and the continued oversight by Senate Commerce and the House T&I committees.

“Chairman Elliott and Member Begeman not only provided a detailed overview of the progress being made in implementing the new law, but they also stressed how important it is for FRCA and other shipper groups to actively participate in the pending and anticipated rulemakings to help share our experiences and suggestions on how the Board can better serve its stakeholders”, offered FRCA Board member Shelley Sahling-Zart, Vice President & General Counsel, Lincoln Electric System. Sahling-Zart also serves as Chairman of the STB RSTAC (Rail Shipper Transportation Advisory Committee).

Another topic generating much discussion was the challenges in securing additional appropriated funding for the STB moving forward. Even though a positive foundation was set with the increased authorized levels in P.L. 114-110, Fly-in participants agreed that achieving increased appropriated funding is difficult in the constrained budget and complicated political environments.

Following the presentations and discussions, Fly-in attendees fanned out across Capitol Hill to meet with lawmakers from their home states and districts as well as staff of key congressional committees. One such meeting was with Commerce Committee Chairman, Senator John Thune (R-SD) where his constituents and Fly-in participants thanked him for his steadfast leadership and commitment to freight rail shipper issues.

“We were extremely pleased to be able to personally meet with Senator Thune and his staff during the Fly-in and thank him for his tireless efforts to get STB reform passed. Coal shippers and agricultural shippers in South Dakota and the nation will, in the long term, see benefits from the legislation,” said Tom Heller, FRCA Board member and CEO of Missouri River Energy Services.

During this meeting, Chairman Thune emphasized that “I greatly appreciated hearing the perspective of shippers from South Dakota and across the county as the STB implements important reforms. The Commerce Committee plans to continue overseeing the implementation of the STB reauthorization legislation, and we look forward to continuing to work toward improving the responsiveness and efficiency of the STB for farmers, energy shippers, and other businesses who deal with the agency.” 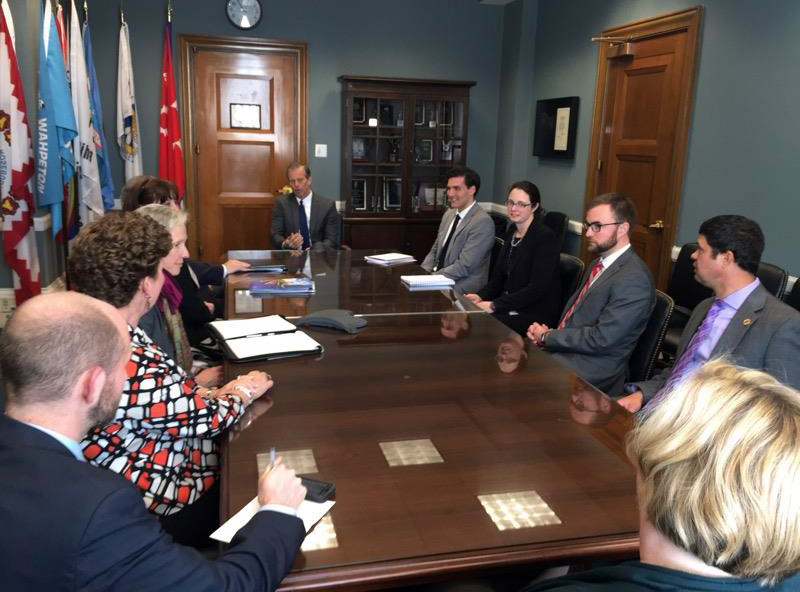 Some Fly-in attendees took advantage of their time in Washington, D.C. and met with other Federal agency officials, including the Federal Railroad Administration.

Among the Fly-in participants was Emily Regis, Fuel Resource Administrator for FRCA member Arizona Electric Power. “The Fly-in was a great opportunity to visit legislative staff and various agencies on the hill and discuss some of the issues that are so important to rail dependent shippers like ourselves,” Regis said. “Arizona Electric Power has always held the position that rail dependent shippers need an advocate at the legislative level and a voice before the STB. Being involved and informed through FRCA is an excellent resource for us.”

Also, industry representatives joined Fly-participants at the Congressional Reception, held as a part of the Fly-in, where numerous Members and congressional staff stopped by to meet with freight rail shippers and chatted about issues of mutual interest and concern.

Phi Squair, Senior Vice President, Public and Governmental Affairs with the National Propane Gas Association (NPGA) remarked that “As a new member of FRCA, NPGA eagerly anticipated
being part of this legislative fly-in. The U.S. propane infrastructure has undergone significant change in recent years, which has caused the industry to dramatically increase its reliance on rail transportation. It was obvious to me that FRCA’s efforts on behalf of shippers has generated excellent relationships with Congressional and Administration offices. Ongoing contact with these officials will help us protect our customers from excessive rates and/or service issues. We’ll be part of the Fly-in next time, for sure.” 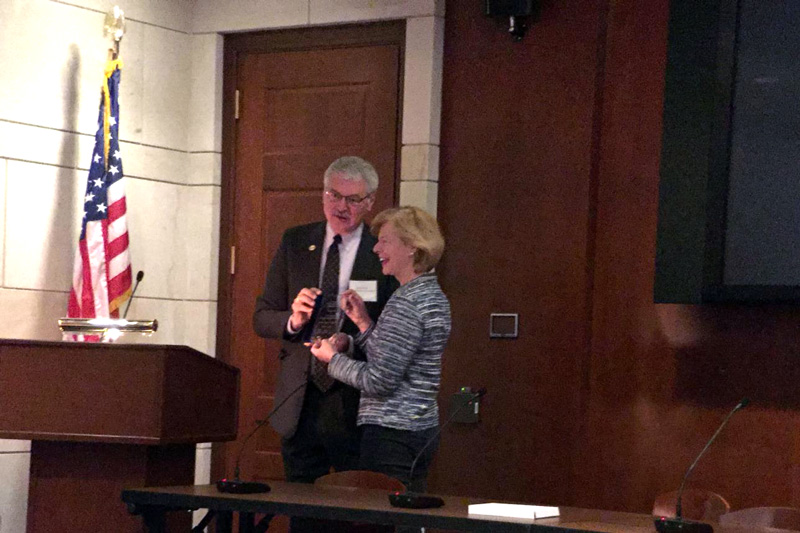 U.S. Senator Tammy Baldwin (D-WI) was honored by the Freight Rail Customer Alliance (FRCA) on April 6 for her continued leadership and commitment to rail shipper issues throughout her service in the U.S. House of Representatives and the U.S. Senate.

As a member of the House of Representatives from 1998-2012, Senator Baldwin advocated on behalf of farmers, utilities, manufacturers and other rail shippers through her membership on the House Judiciary Committee. In particular, she was one of the first to have sponsored legislation and continues to support legislation that would remove anti-trust exemptions enjoyed by the freight railroads.

Following her election to the U.S. Senate in 2012, the Senator continued her support for rail shipper issues, most recently by authoring legislation in the current 114th Congress, The Rail Shipper Fairness Act of 2015 (S 853), that would reduce costs and improve service problems faced by a broad coalition of Wisconsin (and national) rail shippers, including farmers, manufacturers and utilities.

In addition to her rail shipper fairness bill, Senator Baldwin supported another STB reauthorization measure, the Surface Transportation Board (STB) Reauthorization Act of 2015 (S. 808). Before advocating for the bill’s passage, the Senator played a key role in obtaining assurances from leaders of the Senate Commerce, Science and Transportation Committee and the STB Chairman that Section 16 of S. 808, would not provide the railroads an advantage when arguing for replacement cost methodologies when the STB evaluates revenue adequacy. This legislation, actively supported by FRCA, was signed into law (P.L. 114-110) in December 2015 – the first time the STB has been authorized since 1998.

FRCA also thanked the Senator for her continued assistance in ensuring that the new STB reauthorization law is implemented in accordance with the statute and Congressional intent.
Brian Rude, FRCA Secretary/Treasury, and vice president of external and member relations for La Crosse WI-based Dairyland Power Cooperative, presented Senator Baldwin with the award on behalf of FRCA. “Tammy Baldwin has been a supporter of rail shippers for more than a decade,” Rude said. Beginning In 2006, Wisconsin shippers approached Tammy to express our concern about rail costs and shipping practices. Tammy without hesitation took it up. And she dug in with a tenacity and interest level that really counted. She was a House leader of the anti-trust legislation.”

“When she went to the Senate, she continued to champion effective and pro-shipper STB reform,” Rude said. ‘‘It was no surprise to me, and to the Wisconsin Freight Rail Customer Alliance, that she’d be there in the details as we debated STB reform particularly this past year. She is one of the few who knows the intricacies of legislation in this area, including the delicate negotiations on Section 16 and other aspects of the rail issue.”